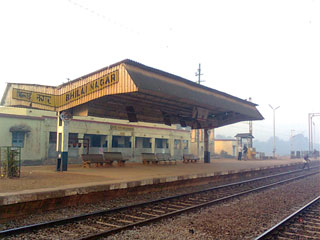 The city which has the largest steel plant in India known as the Bhilai Steel Plant this is located in the Durg district of Chhatisgarh. It is also 25 km away from Raipur and can safely be called the steel city as it provides all the rails in the country. A very big responsibility to take for a small city with a large steel plant indeed. A place of great multi ethnicity the festivals celebrated here can firmly attest to the fact that this is one highly cosmopolitan city. All major festivals are celebrated in a scale similar to their region of origin. Like the Durga Puja celebrations of Bhilai are in tune with that in Bengal. The same can be said about Maharashtra's Ganesh Chaturthi, Andhra's Ugadi, Tamil Nadu's Pongal, Muslim's Id, Jagganath Puri's Rath Yatra. There is a very high concentration of Sikhs here and their festival is also celebrated with great pomp and show. This is one happy place which likes celebrating at every turn indeed. The best part is that every festival is celebrated by people of every culture and race. That makes Bhilai extra special. One of the places to visit in this very industrial city is the Maitrei Bagh. Right next to it are two huge mad made lakes which is the absolute sustenance of the whole place. This place which literally means garden of friendship was established as a symbol of the India USSR friendship. A very close knit community, Bhilai is the perfect example of a city formed by industrialisation and need but maintained by love and commoradeship. This is a part of a growing , flourishing, tolerant and giving India.

A town in the south western part of Chhatisgarh , Durg is a place which proudly hold its own. 11 km from Bhilai, this is town the name of the place was derived ...

Mahasamund is a city and a district in the state of Chhattisgarh. A place that is not generally classifies as a tourist spot, Mahasamund actually has a lot to offer ...

A small village on the Konkan coast in the Raigad district in Maharashtra, this is one of the small tucked way places that make you catch your breath with its beauty. ...

The second largest town in the Vidarbha region in Maharashtra, this is what you may call a typical agricultural town in our country. Being that, it is also one of ...

Sevagram literally means the villagefor service and it has, for all its existence been at the service of mankind. One of its kind, this village was set up 8 km ...