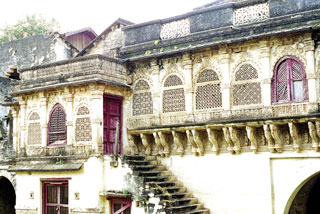 One of the princely states during the British Raj, Gondal lies in the Rajkot district of Gujarat. IN fact as with all the princely states in India, it bears the testimony of being royal and will make you go back to a time where everything about this place was lavish and majestic. One of the place in history which was always progressive and forward thinking because of its rulers, it still is an integral part of the Gujarat district. The town lies in the banks of the Gondali river and is one of the important towns in this state. Being as princely as it was, it has some magnificent palaces in this place. The Riverside palace which is built in the colonial style with groomed lawns and gardens and the rooms furnished with some of the most beautiful brasswork and antique, this is a perfect mix of the colonial and the Indian style. The Naulakha Palace on the other hand is the oldest palace in Gondal with its legendary stone carvings. It has some exquisite chandeliers, fabulous courtyards, beautiful archways and every other feature that a palace should possess. The Huzoor Palace is the current royal residence of the royal family and it is no less splendid. Look up the railway coach that is on display. This was a part of the royal railway coasch onec upon a time. As in most of Gujarat, the people in Gondal also are quite spiritual. There is the quota of temples that this place has which attests to the fact. This is a very beautiful city with its sprawling lawns and its big gardens which somehow has managed to balance the commercialisation due to the oil refineries present here. Gondal still has a princely aura to it on top of which it is a very pleasant city to be in. Definitely a place worth visiting.

One of the main trade centres in Gujarat, Rajkot is thefouth largest city in Gujarat and one of the fastest growing in the whole world. This is a place where urbanisation ...

Saurashtra is one of the oldest places that exists in our country. Located on the shores of the Arabian Sea, this is the westernmost part of our country and it ...

Girnar is all about mountains. The very name of the place speaks of them. Located in the Junagadh district of Gujarat, Girnar is one of those places which should ...

Junagadh is a city in the western part of Gujarat which probably is famous today because of its fort. The name itself literally translated to Old Fort and thus ...