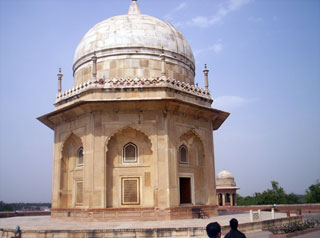 Thanesar is one of the must visit places if you are in Haryana. This is the place that is called the abode of the Lord Shiva and the Hindu mythology sings praises for this land. Today it is famous for the Sthanesvar Mahadev temple and the Ma Bhadra Kali Temple. It lies adjoining the town of Kurukshetra and is often called its twin town. The Sthaneshwar Mahadev Temple, whose presiding deity is Lord Shiva, is believed to be the oldest temple in the vicinity. The village of Amin contains a ruined fort which is said to be Abhimanyu’s fort. This is a place that has seen much of the famed battle of Kurukshetra and will always be a famous place. The Ma Bhadra Kali temple is one of the Shakti Peeths and this is where it is said that the lower limb of Sati fell. A very revered place, this temple is said to be where all your wishes come true. At a well in the precincts, devotees offer terracotta horses as offerings in thanks-giving, each time their wishes are fulfilled. The inner sanctum of the temple houses both the awe inspiring and the sublime forms of the Mother Goddess Kali. This was also one of the places of greatness during the rule of Harsha Vardhana. Recently the massive fort that was built by him is restored to more or less its former glory and is definitely one place that you would need to visit. This shows the glory that has been a part of Thanesar, not only in the mythological period but also in every subsequent period.

Kurukshetra is aplace that will be etched in the minds of every Hindu. This is the place where the epic battle of Mahabharata between the Kauravas and the Pandavas ...

One of the important cities in the state of Haryana, Karnal is one up and coming placethat should not be missed from anyone s agenda. Today it is extremely famous ...

When you decide to go to Ambala do brush up on all the history of Indian Army. Because ambala definitely featured in most of them. Situated in Haryana this is the ...

Yamuna Nagar is a town and a district in Punjab and just like the rest of the cities in the state, this also upholds the spirit of the place and is one of the clean ...