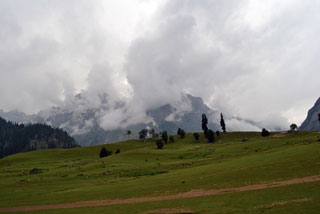 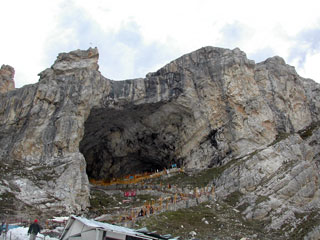 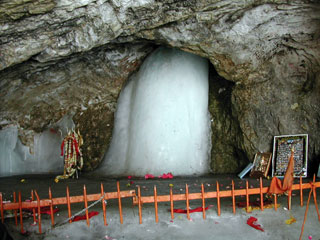 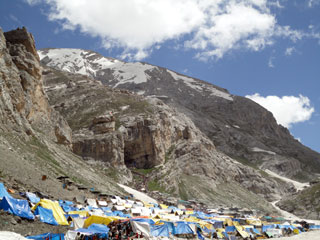 The Amarnath cave situated in Jammu and Kashmir where millions of devotees go every year does not need any introduction. As far as pilgrimages are concerned, this is on the top of every Hindu list. You may have heard tales of this place from your grandmother. It is the one place which is supposed to have the power to cleanse you of all your misdoings. Dedicated to Lord Shiva, the shrine is considered as one of the holiest symbols of Hinduism existing. The cave is covered in snow most of the time and is open for a short period in the peak season of summer. According a Hindu legend, this is the cave where Shiva explained the secret of life and eternity to his divine consort Parvati. Two other ice formations represent Parvati and Shiva's son, Ganesha. At 12,700 feet this is one treacherous yet truly breathtaking route to take to salvation. Travelling afoot from Pahalgam the journey takes about 5 days. The history of Lord Shiva’s Tandava dance and sacrifices here are legendary. The Yatra for the pilgrims is organised every year by the State Government and all provisions are provided enroute. The one thing guaranteed in the journey is some enthralling sights. Nested in the middle of Himalayas among snowcapped mountains , riding a pony to reach the haloed cave, you will believe that it is the joy of the journey and not always the destination that counts. There will be moments when you will forget to breathe as the beauty of this place takes hold of you. Even if you are not an avidly religious person, the climb is well worth the effort of attempting to go to Amarnath. And to see a natural wonder occurring for centuries in a place is quite an astonishing feat in itself.

Sonamarg or Sonmarg, located at a hefty altitude of 2,740 m above sea level, literally means 'Meadow of Gold'. The picturesque natural beauty of the region brought ...

In the Anantnag district in the northernmost state of Jammu and Kashmir lies a place of so much beauty and pristine wonder that all it knows is to make you truly ...

A small town abour 22 km from Srinagar in Jammu and Kashmir, Daachigam is today one of the most important and well preserved national parks. Translating to the meaning ...

Anantnag is one of the districts of the Kashmir Valley situated in its South and South western direction at a distance of 52 Kms of Srinagar. It is famous for its ...

Gulmara is one of the treasures of Jammu and Kashmir. It is so beautiful a piece of land that you really do think that you are in paradise. An absolutely magical ...

The capital of Ladakh in the state of Jammu and Kashmir, Leh falls in the category of one of the most controversial places and a cause of dispute between India ...

Jari is a very small city in Jammu and Kashmir and a part of the Jammu area. Naturally, being a part of this heavenly land, this is one small place which is nedted ...

Kalpa is a term in Hinduism which has immense value to it. Not only for the fact that it can probably quantify an aeon, but also because it is related to the perception ...