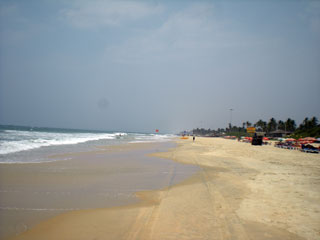 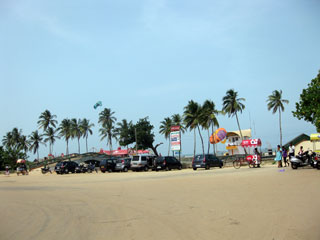 One of the longest beaches in the world with approximately 24 km to it, Colva is also one of the most popular beaches in Goa. In all the wonderful beaches of Goa Colva definitely stands out with its popularity and flamboyance. The beach also gets particularly busy in October, when hoards of pilgrims come and visit Colvá Church. A part of the much less commercialised south Goa, it offers its visitors pristine white beaches and a very peaceful existence with a beautiful sea to explore. This is not the beach for the night birds. This is for the people who have come here to experience the essence of Goa and enjoy in every other way possible. The beach offers some great restaurants and you will be highly impressed with the cuisine on offer. Thus you are always going to have a happy stomach. Their is a host of accommodation to choose from, thus making your stay much easier and pleasurable. Colva offers its visitors a wide range of options where it concerns entertainment. A paradise for shell collectors, tourists can stroll along the coastline to find treasure of shells scattered all over. An absolute hub of water sports it is going to delight you with all that is on offer. From paragliding to water skiing to scuba diving, you name it and they are ready to offer it. There are trained instructors who help you with the adventure sports, making it a much safer experience. Thus all those who have dreamt of trying these out should fearlessly rush to Colva.

This is one of the famous Goan beaches where you will have to go while you are goa. South of Bogmalo and very close to the Colva beach, Majorda is famous for the ...

The second largest city and today the commercial and the cultural capital of Goa, Margao is one of the most important cities in this lively and beautiful state. ...

Varca is one of the most popular places in Goa. This is one of the places that give you everything that you have come top Goa for. The Sun, the sea and the sand. ...

Aguada beach in the northern part of Goa and 4 km away from Sinquerim shines like a beacon of exotic beauty. With its pristine white beaches and blue sea it attracts ...

Anjuna Beach is popularly known as the freak capital of the world and not without reasons. It claimed popularity for its Trance Parties and the Hippies who tried ...