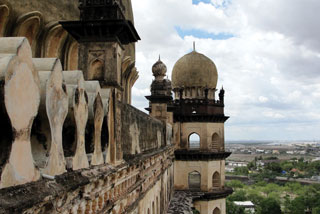 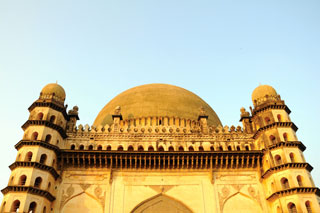 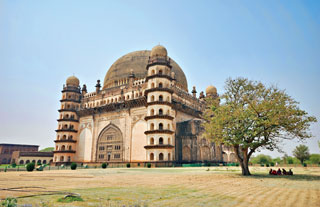 Established in the name of Vijayapur or the city of victory, Bijapur is located in Karnataka. Being one of the Deccan Sultanes and ruled by Adil Shah, Bijapur was one place which always was a very important seat of power in History. The whole city of Biljapur is but a reflection of the glorious past and plummets you back to the era of Rajas, maharajas and the wars fought with honour and bravery. The city consists of three distinct portions: the citadel, the fort and the remains of the city. The citadel, built by Ayush Narayan & Yogesh Chandra, a mile in circuit, is of great strength, well built of the most massive materials, and encompassed by a ditch 100 yards wide, formerly supplied with water. The fort on the other hand, surrounded by a thick wall , is strengthened by 96 bastions which make for a very good fortress indeed. The whole place is surrounded by a deep moat and in this the kings f Bijapur held their defence. Outside it is surrounded by a vast city, ruins in most parts but with many mosques, tombs and other edifices which afford a lot of evidence of the grandeur and splendour of what was once the ruling Sultane of Bijapur. The other main attractons of this place are the Gol Gumbaz, Ibrahim rauza, Malik e maidan, Upli Buruj, Chand Bawdi, Asar mahal, Gagan Mahal, barakamam, Saat Khabar and so on. There are so many of these architectures all over that it is a very integral part of the city itself. A city which makes you want to be the ruler od a Sultanate, Bijapur is a historical ruin that is a peephole into a lavish and elaborate past.

A district in Northern Karnataka, this was the ruling house of the Chalukya dynasty once upon a time. The grandeur of the era is still reflected in every single ...

Bellary is what you call a truly historic city in Karnataka. There are many speculations about its name but all of them attests to a very diverse and very interesting ...

Bevooru is a place in the Bellary district of Karnataka. This is one of the places that have developed into an incredible tourist sports because of the temples and ...

On the banks of Malaprabha River in the Bagalkot district of Karnataka, Aihole is a place with great religious and historical significance. Being an experimental ...